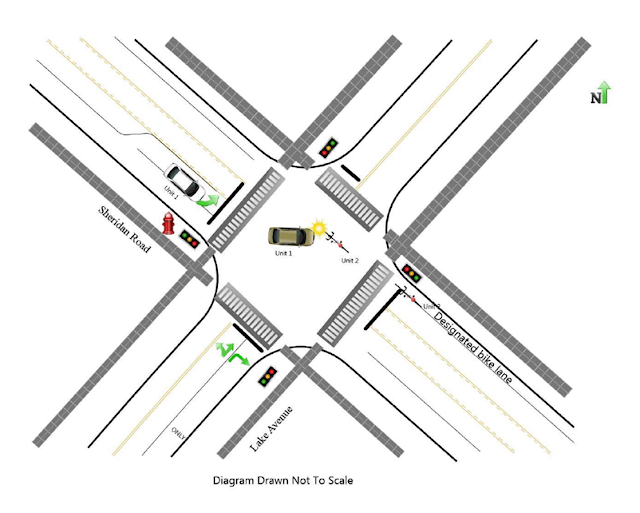 On August 29th attorney Tom Reuland of Keating Law won a heavily contested jury trial for a Chicago bicyclist. The cyclist sustained a non-displaced fracture to his wrist when he was the victim of a “left hook” on Sheridan Road in Wilmette. The driver involved in the crash was a local law professor who insisted that the cyclist entered the intersection on a red light and was at fault.
State Farm, who insured the driver, considered this a “no-offer” case, meaning they were so confident they would win this case that they refused to pay even a dollar to compensate our client for his injuries. State Farm never even offered to pay for the injured cyclist’s medical bills, let alone any reasonable reimbursement for the other harms he incurred like pain and suffering.
Our client was out for a recovery ride after a morning race when a car turned left in front of him and crashed into him. He traveled through the intersection of Sheridan Road and Lake Avenue in Wilmette, Illinois. Many Chicagoland cyclist know that this is a popular route for cyclist due to its proximity to the lake and the Green Bay Trail.
This case involved a dispute over the color of the traffic lights at the four-way intersection of Sheridan Road and Lake Avenue. There is a designated bike lane that runs along Sheridan Road. The stoplight at that intersection has a green arrow for cars turning left across oncoming lanes of traffic. The defendant and a passenger in the defendant’s car both testified that the car entered the intersection on the green arrow. Our client testified that he had the solid green light when he entered the intersection.

The cyclist alleged that the driver had a duty to yield the oncoming traffic, in this case the bicyclist. The Illinois Rules of the Road explicitly provide that a motorist must yield to all oncoming vehicles. The 2017 landmark legislation, Dennis’s Law, clarified that bicycles are included in the definition of a vehicle.
State Farm’s decision to never offer any money to settle this case turned out to be wrong. The Cook County jury found the defendant at fault for the crash. The defendant, a licensed attorney and law professor who also made a living giving expert testimony in front of judges and juries, was cross examined by attorney Tom Reuland for nearly an hour and was caught giving inconsistent statements multiple times.
Our client is an experienced cyclist who knows the rules of the road when it comes to bike safety. Keating Law remains dedicated to safe cycling whether its in the City of Chicago, the suburbs, or anywhere else across Illinois. We are proud that our willingness to stand up to State Farm and refuse to take no as an answer yielded a trial victory in a Cook County courtroom.