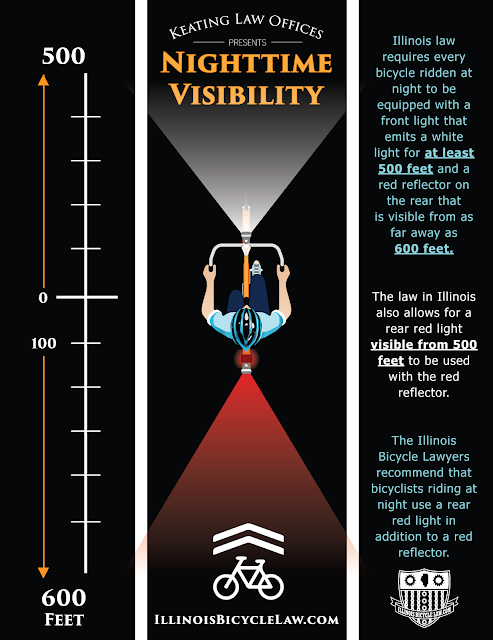 December 21st marks the Winter Solstice for 2021. The Winter Solstice occurs when the North Pole is tilted the farthest from the sun and there is the least amount of daylight. After the Winter Solstice the days slowly get longer until then end of January when we gain two minutes of sunlight each day. While that doesn’t sound that far away, there are some long and dark nights ahead of us.
These long nights in winter mean that Illinois bicyclists who commute to work via their bikes will be riding home in the dark. It is important to note that a headlight not only gives you greater visibility while riding and makes you more visible to drivers, but it is also the law throughout Illinois.
Bicyclists riding at nighttime must have the following on their bikes according to Illinois Bicycle Law:
The law from the Illinois Vehicle Code reads as follows:
625 ILCS 5/11‑1507) (from Ch. 95 1/2, par. 11‑1507) - Lamps and other equipment on bicycles.

Curiously, this Section of the Illinois Vehicle Code provides that a red light visible from 500 feet may be used in conjunction with the rear red reflector. This is somewhat awkward because it would make sense to allow a red light visible from 500 feet instead of a red reflector that may only be visible from as little as 100 feet.
I’ll give the drafters of this law the benefit of the doubt and conclude that this addition was to encourage bicyclists to use red lights on their bikes yet, at the same time, realize that many cyclists might only have the usual red reflector available. Illinois law (as well as sound safety measures) require the use of a headlight and a reflector and at least encourages the use of a rear red light. With these long winter nights ahead, the use of a headlight and a taillight will get you home safely – and legally in Illinois.
About Keating Law Offices 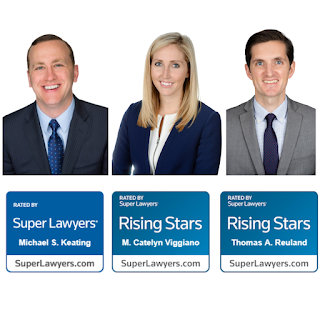 Keating Law Offices’ experienced bicycle accident lawyers have a long record of case results for clients and are considered national leaders in bicycle law. We are also bicyclists who are very active in Chicago’s cycling community. We put a lot of milesA on our bikes, support bike advocacy groups, and sponsor road bike and cyclocross bike races in Illinois.

Attorney Michael Keating is well known in Illinois as a leading legal authority on cyclists’ rights. He serves as the Chair of the American Association of Justice’s Bicycle Litigation Committee. Mike has been the featured speaker on bicycle law at legal seminars and published articles about bike safety in legal journals. Recognized as a leading authority on bicycle law, Mike has been interviewed on NBC, ABC, FOX and CBS news, as well as in numerous print publications including the Chicago Tribune, Chicago Sun-Times and the Chicago Daily Law Bulletin.